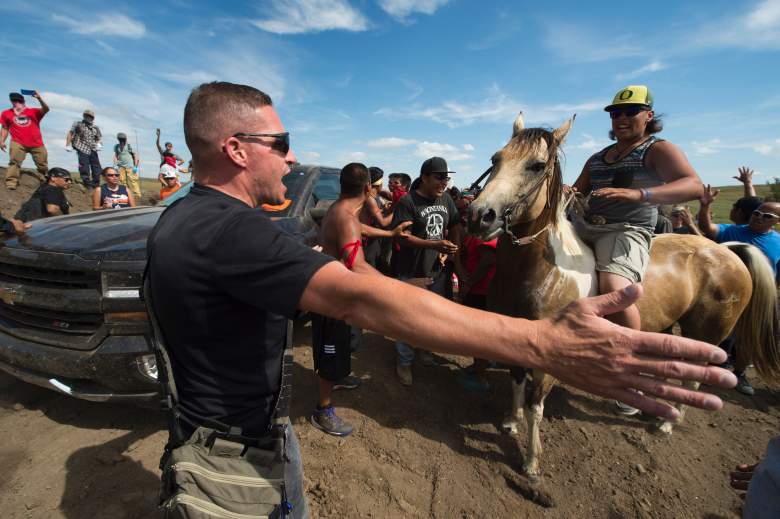 Here is the article written by Jack Healy as reported in the New York Times, Nov. 1, 2016.

The stark contrast of narratives/accounts of the conflict are unsurprising and the tropes are so unextraordinary. Colonization and the imperialist, capitalist, white supremacy capitalism is soooooo trite. A few points to which I’d like to call attention to in Healy’s report:
1. The Sioux activists perspective communicated to police while sitting with them in a prayer circle  (get a sense of even the posture and setting of the exchange)

You hear the “we”, the “community” the extended self, family, generations perspective.

Whereas the police response is:

“I’m the son of farmers and we worked hard for everything we have.

Note the personal reference of power compared to the ‘we’ and the reference to an American individualism, neoliberalist narrative: work hard and that’s all that matters; nobody is ‘giving’ you anything including your rights and your dignity’–get a respectable profession/work and then you will be respected’

The state police narrative continues with

“Sometimes the job sucks, but you do your job.”

So you can see again the logic that brings you back to “the work” and loyalty to that “work” as a rationalization for the dehumanization of others and the subordination of matters particular and specific to Sioux existence and their human rights. For the policeman, rights are entirely subordinate to police executing their job and as they must by force against those that oppose their all-powerful role of policing. “You do your job though the job sucks.” Again in this commentary, there is a commitment and preferencing of ‘duty’ and loyalty to the state and its strategies of violence even though you acknowledge that it “sucks”, which I interpret to mean an acknowledgement that it is not fair.There’s also a suggested resignation that the officer implies when using that phrase “it sucks” which is to say that one just has to suck it up because that’s just the way it is.
2. The typical narrative by the state and the respectables in an effort to diminish the protest cause and protesters’ power is to center the policemen’s account of who is ‘powerless’: nearby residents and ranchers. The police narrative states

“Ranchers have grown angry and impatient with the protests and regularly come up to Deputy Moll when he gases up his car to ask him when it will all just be over. He (the deputy policeman) says he sees the Standing Rock Sioux as neighbors and respects them, but he has a harsher view of what he sees as hard-core protesters from outside North Dakota. “Folks are terrified,” he says”

Incidentally the strategy of the policeman is to raise the ‘interest’ of the local ranchers who don’t appear to stand in solidarity with their neighbors, even though  they respect them ‘so much’. This strategy indirectly invokes a compassion and alliance with the oppresssor as victimized. Also, it functions to establish in the order of rights that perhaps in actuality other people other than the First Nations community have a right to complain and not be bothered by the First Nations water protectors (a fallacious premise).  That others are being harmed by the activists declaration and engagement for their rights.

You also can sense the infantilizing placation of the Sioux Tribe water protectors and their anti–oppression resistance sounded off in the exasperation of wondering “when it will all just be over” as if the activists are just throwing some kind of annoying tantrum that just needs to be waited out rather than attended to.   That disrespect is then coupled with a half-ass position of smug solidarity: “the Standing Rock Sioux are “neighbors” and “respected”.

Then you see that exasperation raised in the narrative to a dread of the “the restless natives” trope.  The comment of the policemen reflects that the “dangerous natives” strike fear in the heart of the poor, defenseless, (presumably white) local community. “Folks are terrified,” he says. We are expected to empathize with the oppressor, who incidentally is not a persona but an ideology and consequently those who embody that ideology.

The other systematic manipulation of the oppressor is to then pin the resistance not on the docile, good-neighbored, respected-wouldn’t-hurt-a-fly discontented neighbors. Rather the agitation is located from outside of the locus of appropriated power and control: “these hard-core protesters from outside North Dakota”–the outsider trope because never would the good ‘Indians’ ever act out in such betrayal. It must be folks ‘not from around here’ and therefore not to be trusted. Also, now stamping out the resistance looks like a strategy of protection rather than an infringement and disregard for the rights of Sioux Water protectors and First Nations people globally.

3. Finally, the justification for state violence against the water protectors is really the antagonism for dissenters who dare defy or stand against state sovereignty, control, imminent domain and power. That justification, which is slightly laughable is the vision of a militaristic strategy of the attack-horse. Police officer dramatizes within his imagination ““You run a 1,000-pound animal at a 200-pound person, that’s a deadly threat,” Mr. Moll said. “They were willing to use the threat of the horse against us, all the while screaming, ‘We’re peaceful protesters.’” So here you can see that somehow the horse has now been made the great threat and enemy against the forces of guns and militaristic artillery and police squads and cars. Here it is, almost played out like a page from our history books, the colonist and settlers who ‘come in peace’ yet invading the lands of the First Nations Tribes and met with resistance. Now all of a sudden they are victimized by this threat of a ferocious, all-powerful, bomb-wielding 1,000 lb horse. The horse is conceptualized as trained to attack as a weapon.

The delusion of the imperialist white-supremacist capitalist patriarchy has NO Chill and is boundless…and so DAMN predictable.

My Stream of Consciousness